Her Things Should Keep Her Marks 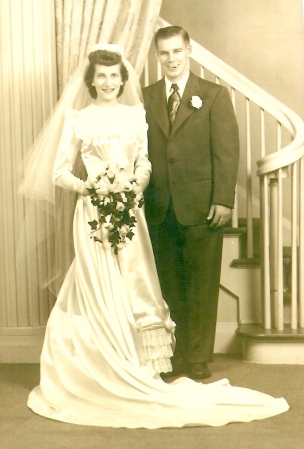 She washed the dishes. He dried. That’s how I knew what love was.

My grandmother, Bernice Helen Kosterman Zens, died tonight at 6 p.m. at the age of 91. I can tell you the outlines of her life, the things we always tell the newspapers: three children, eight grandchildren, a home, a nursing career, a life, a story of fight and survival. She was tough, all 91 pounds of her soaking wet. She loved gardening and hated pets. She was as devout a Catholic as anyone I’ve ever met. And she was stubborn as the day is long and wouldn’t do a damn thing she didn’t want to do. I get it from somebody, after all.

I have the outlines, and then I have what reminds me of her: Her old stovetop percolator, birthday cards with spidery unreadable handwriting, and a collection of photographs in which she scowls with a look that would freeze your blood if you took it seriously. She hated being photographed. Just hated it. She’d cover her face with her hand or hide behind a cousin.

She thought she was hideous. In my entire life I’ve never thought anyone was more beautiful.

But I have more impressions of her early life than facts. She didn’t believe in looking back. If you’d grown up poor, one of 11 children during the Depression, you wouldn’t look back, either. Press her for stories, and she’d distract you with a game or a cookie, but those childhood hardships left their marks, like old healed-over burns, or long-gone limbs that itch and ache in the night. We joked that she would save the dust bunnies under the bed in case they could be of use some day. She washed and folded used tinfoil, bread bags, mended socks until they were more mend than knit. She grew carrots and beans and rhubarb in a huge garden and canned everything in sight. The root cellar could have withstood a siege of years. It was funny to kids growing up with comparative plenty, but: nothing was wasted.

She lived like that, too, wasting nothing. She was a nurse in a Chicago hospital between the World Wars, when the city was growing up and outward, straining its boundaries and the patience of its populace. She spent her days treating poor and orphaned children, stepping over drunks in the skid row gutters to get to work and then going out to give those same drunks a sandwich on her lunch breaks. She returned home, after a year, having gone the farthest from her small town that anyone in her family had ever gone, and married my grandfather, because he was kind and caring and endlessly patient, and they bought a small house near her sisters and their husbands. And for 49 years they did the dishes together. He worked in factory and she kept the house, but this he did: He helped with the dishes.

I spent every Wednesday night after school with them, doing homework in their living room and listening to them talk low in the kitchen, over pots and pans and cups and saucers. Every night, no matter how bad the day had been, no matter what was going on with their kids or grandkids or in the world or on the moon, they washed the dishes together. Come ruin or rapture. They stood beside one another and worked together, and it doesn’t look like much, written out like that.

But love is a choice. All love is a choice. All love is work. When people say relationships are work, what they usually mean is that there are times when relationships, especially marriages, are drudgery, misery that must be endured, but that’s not what I’m saying when I say it. Relationships are work because you share a common task to which you put your hands, and work like that, in concert, is meaningful and joyous, fulfilling, a reason to get up in the morning and smile every day. “Marriage in Spanish iscasarse, to build a home with,”Jacob wrote once, “you build a cabin, and live there together.” You are building something together. A house. A home. A family. And you do it like this, two by two, night by night, at the sink. She washed. He dried.

When she moved out of her house five years ago, I wrote about it, and them:

… there, he’d protect you, she’d comfort you, give you that smile that split her stern face and lifted you up out of your shoes, it made you that happy, you felt that loved.

Five houses down from a church, on the east side of the block round the corner from the bakery and the Italian restaurant and the dime store. A brown-sided bungalow with two dormers in front where each Christmas he hung baby dolls against tin foil wings, Joy to the World written above them. The Lord is Come. Joy, joy to the world, and the warm Christmas mornings you walked over, presents piled in paper bags.

You’d go upstairs, up the curving staircase past the window that let into a crawl space where your baby things were stored, and into the bedroom your mother and aunt had shared long ago. It was yellow, with desks beneath dormers and a door that led to the attic space.

Her wedding dress hung from the ceiling in a plastic sleeve, ghost of a love story, with your mother’s many bridesmaids’ dresses you loved to play in hanging behind it, 1970s green chiffon and bright blue velvet. Tins she used for Christmas cookies, ice skates, old watercolor paint sets and board games you see now at antique markets and think of buying. Spider webs. You hated spiders. She’d catch them and throw them outside. You wanted them squished.

You played with her old jewelry boxes; on the bookshelves there was a book from the 1950s about beauty that said tall girls should stand up straight because slouching was useless and only made them look slovenly. You always stood up straight after that. People ask if you’re a dancer and you think, something to thank her for that neither of us even noticed she was doing, putting that book where you, awkward teenager, would find it.

They were the best grandparents anyone could have had. He died the year after I got married, after complications from heart surgery took him down. The last day he saw me, the last day he was really coherent, he said, “You were a good granddaughter. We had fun.” The last time I saw her, a few weeks ago (too long) she said to one of the nurses, “This is my great granddaughter.” The nurse thought she meant it literally. “No,” she said, “this is my GREAT granddaughter.” Those are the things I think about when I can’t sleep and I’m wishing I had done more, spent more time with them both, been a less willful, selfish brat, been less of a burden, been better or kinder or smarter. Those are the things they remembered, and those are the things I will try to remember, too.

A lot of people will say comforting things in the coming days, especially since her death comes at the end of a long, cruel illness, about them being together forever now, about them being young and beautiful and no longer apart, as they were so terribly in the ten years between his death and hers. They may be right, those people who will say those things. I don’t know. And I don’t think it matters what I believe. It matters what she gave to me, and what I learned from her. It matters what I know, what she taught: Waste nothing. Choose your life. And work hard with someone, side by side.

What I know is that for 49 years she washed the dishes, and he dried. And that was everything.

A life should leave
deep tracks:
ruts where she
went out and back
to get the mail
or move the hose
around the yard;
where she used to
stand before the sink,
a worn-out place;
beneath her hand
the china knobs
rubbed down to
white pastilles;
the switch she
used to feel for
in the dark
almost erased.
Her things should
keep her marks.
The passage
of a life should show;
it should abrade.
And when life stops,
a certain space—
however small —
should be left scarred
by the grand and
damaging parade.
Things shouldn’t
be so hard.

41 thoughts on “Her Things Should Keep Her Marks”