As I posted over at my place this morning, Mr. Beale and I have just returned from a long weekend in New York City.

New York is both America’s cultural and financial center, so the stuff I see there always resonates on a bigger level with me. It’s a place that always makes me think about where this country is and where it’s going. And sometimes what I think is, WTF? For instance, this, seen somewhere around West 53rd and 7th Avenue: 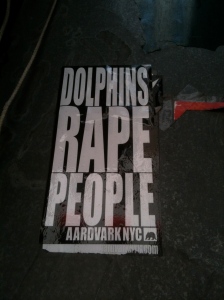 These are strange times we live in and mostly when I write it’s my way of trying to understand What It All Means, which is a very unsatisfying exercise. I just don’t feel like I have the knowledge base required to make sense of this strange world we live in.

For instance, in this era of Scott Walker-style union busting rolling out nationally, corporate media flogging astroturf as populism, and Newt Gingrich waxing nostalgic about child labor, I never thought we’d see a highly commercial hit Broadway musical about … a union organizer. One who organized child laborers to strike against Joseph Pullitzer, the Rupert Murdoch of his day. And did I add it’s produced by Disney, no less?

And yet, “Newsies” is a box office hit, has been nominated for eight Tony Awards, and my theater-industry friends tell me it’s a shoe-in to win Best Musical. Furthermore, while Mr. Beale and I prefer edgier fare, the audience was thoroughly into the show. I’m not talking snooty theater critics, these were families and a large contingent of teenage girls, bused in from the suburbs, cheering and clapping and whistling and wolf-calling all through the show. They loved it.

As a pop culture observer I find this very bizarre. On the one hand we have the ownership class telling us unions kill jobs, taxes hurt job creators, greed is good, and focusing on profits at the expense of workers lower down on the food chain is all part of our free enterprise system. Sure it sucks if hundreds of people lost their jobs so Bain Capital could make a profit but “the free enterprise system can be cruel.” Suck it up and stop whining. The alternative is Socialism and while no one is entirely sure what that is, everyone agrees that it’s Very Bad.

That was not the messge of “Newsies.” The message we heard was, maybe if your dad was in a union the kids wouldn’t have to support the family when he got hurt on the job. Maybe if everyone pulls together and sticks together the ownership class as embodied in the character of Joseph Pullitzer can no longer “treat us like we don’t exist.”

Of course, populist messages have been literary mainstays since forever. I’m just surprised that in this age of the Tea Party and Citizens United and right-wing smearing of Occupy Wall Street that a blatant pro-union message was not just presented from the Broadway stage but so thoroughly embraced. Of course, this fall when they revive “Annie” we’ll see the other side of the 1%, the benevolent Daddy Warbucks. I’m sure that will be a big hit, too. Still, I couldn’t witness the enthusiastic applause and cheers for a successful union strike and not think someone is a little out of touch with the zeitgeist.