‘That Is How I First Came to the Senate’ 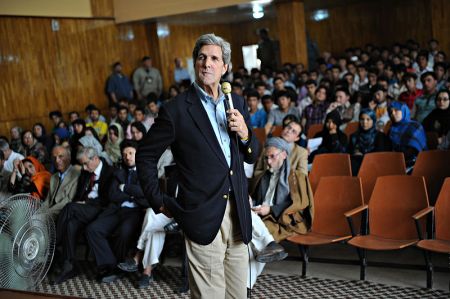 I came to the National Mall in 1971 with fellow veterans who wanted only to talk to our leaders about the war. President Nixon tried to kick us off the Mall. We knocked on door after door on Capitol Hill, but too often couldn’t get an audience with our representatives. A precious few, including Ted Kennedy and Hubert Humphrey, came to where we were camped out and heard what we had to say. And I saw first-hand that our political process works only when leaders are willing to listen — to each other, but also to everyone else.

That is how I first came to the Senate — not with my vote, but with my voice.

This guy fought in the nastiest war the world had to offer at the time and, age 27, came home and took the immensely unpopular stand that this war was bullshit and had to end, and he acted on it. Nobody particularly liked that then.

Very, very rare is it said that I suffered, so that youshouldn’t have to. I fought, not so that I could rest but so thatyou could. During his confirmation hearings Kerry talked about working with McCain, who had every reason to hate the Vietnamese, to normalize relations with Vietnam. He understands that the tests aren’t when all things considered you could give a damn. They’re when you loathe the prospect with every fiber of your being and lay down that loathing anyway. It’s not a burden if it isn’t heavy, but forgiveness isn’t for others, it’s for you, and learning that makes you a grown-up, and these men grew up together.

We have an embassy in Vietnam right now because John Kerry (and, to be fair, John McCain) got the United States to look at Vietnam as a country, and not simply as a war. (If people had done that same thing in, say, 1965, neither Kerry nor McCain might be in the Senate right now, and millions of other people would still be alive.)

And if we had elected him in 2004, if we had managed to be just a little bit less shit-stupid and scared, we’d have a better country now. I felt like 2004 was our chance to stop it; for all my joy in the good things Obama has done and in the prospect of further Democratic gains and more importantly progressive Democratic gains, I felt like 2004-2009 was a time when all the horrors got cemented and maybe some of them might not have been.

The late great Steve Gilliard put it best, ina pieceI keep going back to whenever the “Kerry was a shitty candidate, blah blah blah” argument comes up:

I do understand the frustration of liberals who wonder why they can’t run a real liberal for the White House. Of course, these liberals miss the point that Kerry IS a liberal, a real, bona fide liberal with one of the most liberal voting records in the Senate’s history to match. He’s far more liberal than Bill Clinton. In fact, if a few of these people were less reflexsive and contemptuous, they might find that Kerry was to theleft of Howard Dean on many issues over his career.

I’m also tired of the lesser of two evils crap. Kerry isn’t evil, he isn’t a crook, he doesn’t bang interns in his office. He’s stood for most of what the left wing of the Democratic Party has stood for since 1972. Unlike many rich people, he didn’t stick his money in his pocket and walk away.

Now we have four years of him as Secretary of State. And after that? I still have my Kerry-Edwards sign. Just saying.