Abandoned Luncheonette was the Other Dynamic Duo’s third album. It was *not* their commercial breakthrough but features the song She’s Gone, which would go on to be a hit, just not in 1973.

The derelict diner on the cover is the Rosedale Diner in Pottstown, PA. When it went under, the trailer was dumped on the side of a highway where it was photographed by Barbara Wilson. Here’s how the Abandoned Luncheonette Wikipedia entry describes how this great cover came to be:

On a warm summer day, once the album was finished, Barbara, her husband, Daryl and John drove from New York city to the rural spot on the road about 40 miles outside of Philadelphia. The group arranged permission to take photos of the old restaurant but they thought that the session was incomplete without getting inside. And so they snuck in and Barbara started shooting, carefully tip-toeing around broken glass and tile. The guys squeezed then into a booth and the rest is album cover history (the interior was used as the back cover). The owner began screaming at them when he realized where they were, and they hightailed it out, hopping into their yellow car and speeding away back to New York City.[2]

Wilson shot the black-and-white 35mm images on an old Nikon SLR and then began a silkscreen process to create the surreal color imagery, using a different stencil for each hue and then hand-coloring the final piece. Atlantic Records bought the idea with one change, to re-do the neon tubing letters, which had all been done by hand. It was the only album cover Wilson ever did.[2]

The result is this classic cover.

Here’s evidence of  Daryl and John’s life of crime. One could even call them hamburglars. 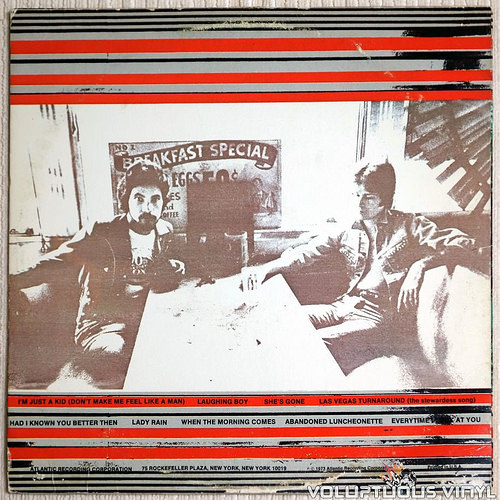