Bunch of Freeper sludge to go through this week, soooo…They lied to president Trump!

King Salman ordered for Saud al-Qahtani, an adviser to Crown Prince Mohammed bin Salman, to be removed, according to the state-run Ikhbariya television, which was reported by Bloomberg News.

The news came as reports surfaced that the Saudis acknowledged that Khashoggi, a U.S. resident and Washington Post columnist, died after entering the Saudi consulate in Istanbul earlier this month.

The Saudi government stated that 18 Saudi nationals have been arrested and are being interrogated in connection with the case, according to a press release translated by The New York Times.

Just a reminder from last Monday :

The president said King Salman of Saudi Arabia strongly denied that the kingdom had any connection to the missing journalist, whose writings were often highly critical of the ruling royal family.

“He didn’t really know. Maybe I don’t want to get into his mind, but it sounded to me like maybe these could have been rogue killers — I mean, who knows?”

Now, back to present day:

They said >1,000 times before this that he wasn’t killed there. They lied to Pres. Trump.

You left out: “And he was stupid enough to believe it”.

The non-journalist was Osama’s BF, so why should anyone care?

Um – because murder and dismemberment is bad and evil, no matter who the victim is “friends” with?
I can’t imagine what’s keeping the 13th-dimensional chess/conspiracy theory brigade…

I wouldn’t be surprised if it was done by people opposed to MBS. It was crude and obvious. The murder was meant to be discovered and made into an international crisis in order to remove MBS as future Saudi king.

Supposedly, they gave the rest of the Embassy staff the day off for the “meating”…PURELY by coincidence. 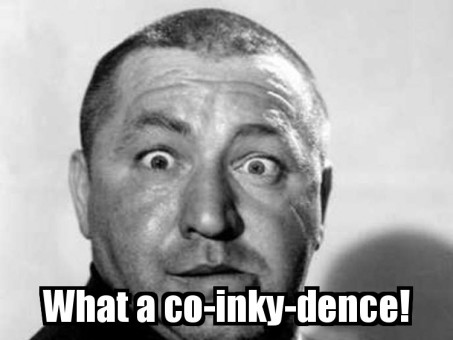 One more from the “so what?” brigade : 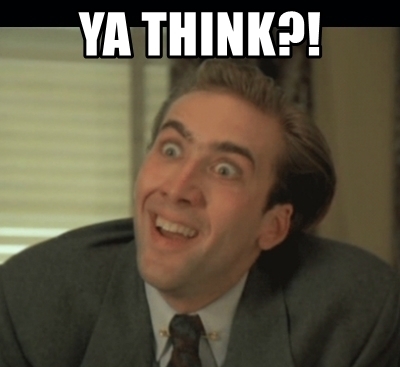 Excusing an atrocity doesn’t play well with us little folk.

More after the jump –
Now, a little flashback – I see a little toiletto of a man…

The Guggenheim Museum has reportedly turned down a White House request to borrow a Van Gogh painting, and has instead offered the Trump administration the use of a golden toilet.

The White House had asked the Guggenheim, based in New York, to borrow Landscape With Snow, Van Gogh’s 1888 work depicting a man and a dog walking through a field.

But the Guggenheim’s chief curator, Nancy Spector, turned down the request, the Washington Post reported on Thursday. Instead she said the White House could loan an 18-carat toilet – an installation by artist Maurizio Cattelan.

The fully functioning toilet, titled America, was installed in the Guggenheim in September 2016. It was available for public use, and tens of thousands of people obliged. But with the exhibition over, Spector saw that the toilet could now potentially serve the president.

Spector’s emailed reply to the White House’s request to loan Landscape with Snow was obtained by the Post. The veracity of the email, which was sent on September 15, was confirmed to the newspaper by the Guggenheim. The museum did not immediately respond to the Guardian’s request for comment.

Spector wrote that America was available, “should the President and First Lady have any interest in installing it in the White House”

What an unbelievably crass, insulting, and tasteless act on the part of the Guggenheim.

What an unbelievably crass, insulting, and tasteless fake President.

Now, let’s see if they get federal funding…

Hey, dipshit – the Solomon R. Guggenheim Foundation is privately funded, not federally funded – but you knew that, didn’t ya.
.
Didn’t ya?
.
Of course, no gesture is too crass, insulting, and tasteless for the Freeperati :

Trump should borrow it. Then return it to the Guggenheim with a few steamers in it. That will increase it’s artistic value as an “installation”…

We need to answer their constant drum beat about preexisting medical conditions.
Self | Self
Posted on 10/13/2018, 8:23:53 PM by Bellflower

Everywhere the opposition has ads poured out about how heartless the evil, mean Republicans are. They want to take healthcare away from poor, poor people with preexisting illnesses. All they care about are big corporate insurance companies. They are dirty, and bought and payed for by them.

Besides, really frightening, is the possibility that you or someone you care about could be, or eventually become one of those with a preexisting health condition. If so, you can be sure those evil Republicans will heartlessly leave you and your love one to die, too.

This pops up everywhere, but I haven’t heard any Republican rebuttals. Maybe they are out there, but I haven’t run into them. This seems to be the opposition’s main ammunition. They have next to nothing but this tear jerker. They are trying to cause people to feel that if they are decent human beings they must vote for the lovely, compassionate Democrats, who care about people over big corporate insurance companies.

OK, isn’t it obvious that since this is their constant drumbeat, their main ammo against us, that we need to address this, and address it fast, completely and convincingly? We need to target people’s hearts, as well as their minds. We need to fight fire with fire.

What say all of you?

Of course, Freepers are all about targeting peoples’ hearts…

what if I have a preexisting condition on my driving record…

Will you sell me auto insurance after I get into a wreck ???

Gee you Democrats are heartless !!!

BOOM!
.
Right in the heart!

We should have pre-existing conditions for car insurance too. Never pay for insurance, and if you total your car sign up with Geico and say “btw, you have to replace my car after you take my first month’s premium”

We need to figure out where we stand and defend ourselves. Burying our heads in the sand doesn’t work.

How do you know until you’ve tried?
Bury your head in the sand, and I’ll be back in a few weeks to check up on you and see how you’re doing.
.
And speaking of oxygen thieves…. 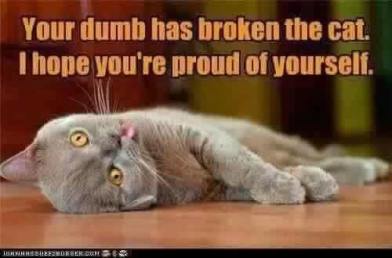 .
Strangely enough, there are actually some Freepers who are aware that they might some day have to go to a hospital :

To: Governor Dinwiddie
people who didn’t want to buy health insurance until they were already really sick.

Not necessarily. What about young people with pre-existing conditions who can no longer stay on their parents’ policies? Young people like this have done nothing wrong or irresponsible but will have a difficult time getting medical insurance in their own name because of their chronic conditions.

“It should be cheap, because you probably won’t use it”

Don’t be ridiculous. We are $20 trillion in debt over medical services provided in the last six months of life. This tendency is growing, not shrinking.

If you cover “catastrophes” – 100% of people will have one, eventually.

I am without insurance for the first time in my adult life and it is scary since I do have a chronic condition. It will be January before I can afford to get new policy and will be on medicare in Oct of 2019 so just trying to hold on until then. Cobra is too high and since I withdrew large amount from my 401-k my income is too high for this year until Jan to find insurance I can afford. Had this all planned differently but had to retire 6 mos sooner than expected so it’s not always that people are scamming the system.

On the other hand I know what has happened to some. When they got a health condition they were then conveniently “let go”. Also, when people get sick and can’t work they must keep paying their premiums or they lose their coverage. They have mounting bills and lose their coverage. There are nasty loopholes that leave people in the lurch. Insurance companies will often do everything in their power to keep from paying out when the time comes when it is their turn to make the neccessary payments. Things do in some situations need to be more fair.

the American people are being gouged by,
doctors, hospitals, drug companies.
we Republicans can either fix this,
or the Dems will win and destroy our country.
take your pick.

is not good enough

I want to puke when some billionaire
like McCain or Libaugh tells working class people
what to do. they have no idea how things are 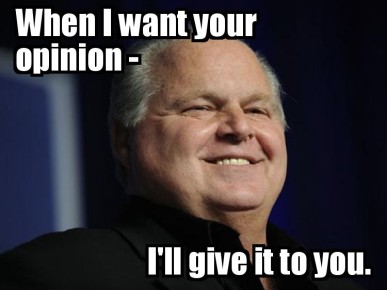 Of course, you know where this thread is heading, so let’s just cut to the chase :

Pre existing conditions are all about AIDS.

A violent incident, in which members of a Trump-supporting far-right group kicked and punched people and wielded a sword on the streets of Manhattan, was captured on camera Friday, and New York Police Department confirmed that three arrests had been made in connection with the incident.

The altercation occurred shortly after the group, which calls itself Proud Boys and is listed as a hate group by the Southern Poverty Law Center, held a meeting at the New York Metropolitan Republican Club.

Before the meeting, the club had been vandalized. Fox News, in its story on the incident, seized on the vandalism to imply that Antifa might have been responsible for both acts.

Its story, headlined “Antifa strikes again” suggested the violence and footage of a man brandishing a sword were linked with the far-left group.

But city officials have never said the vandalism was committed by Antifa, and the man brandishing a sword in the video appears to be the founder of Proud Boys — and one of the founders of the media company Vice — Gavin McInnes.

Multiple other videos and records of arrests provided to Newsweek suggest the far-right group was, in fact, involved in the violent attacks that took place on the Upper East Side of Manhattan on Friday.

Hey – I thought it was the left-wingers who were doing all the up-beating??
That’s what the official fringe-right talking points memo said, anyway,

Well, if the “Southern Poverty Law Center” says they are a violent group . . . I’m thinking they are peaceful patriots waving the flag of the United States and singing the praises of our Constitution.

So they didn’t do it?

Fist bump to the Proud Boys.

So they DID do it?

Southern Poverty Law Center is a Deep State / US Intel front that specializes in the dissemination of propaganda.

At least somebody’s fighting back.

So they DID do it?

Proud Boys are not street fighters.

That comes next. That, or snipers. This has gone too far to end peacefully.

If only there was some way we could identify these patriotic snipers – matching shirts, perhaps?

To: Jim Noble
The ones in Oregon are Street fighters all right. They came to Portland and kicked the antifas ass when the antifa started their usual crap.Instead of running from the antifa when the started throwing bottles and fireworks at the pro Trump really they CHARGED at v them and have them a good old fashioned ass kicking. It was glorious.
20 posted on 10/13/2018, 7:37:17 PM by Jack Black (See my profile for Muller vs.Trump scorecard and other analysis of various anon claims.)