Grim times call for comic relief hence this week’s selection. What’s funnier than a bunch of Southern hippies astride a hog nursing her piglets?

After the success of the Allman Brothers Band, the record labels beat the bushes for Southern rock bands. One of the groups that fell out of the tree was Black Oak Arkansas. They were self-described rednecks who were popular for a few years with their Southern-fried boogie sound.

1973’s High On The Hog was their biggest hit. It features the song Jim Dandy, which became the theme song for their grottily charismatic front man Jim Dandy Mangrum. It’s unclear who or what he was rescuing.

Here are the front and back covers of this gatefolded LP featuring the memorable porcine illustration by Joe Petango. 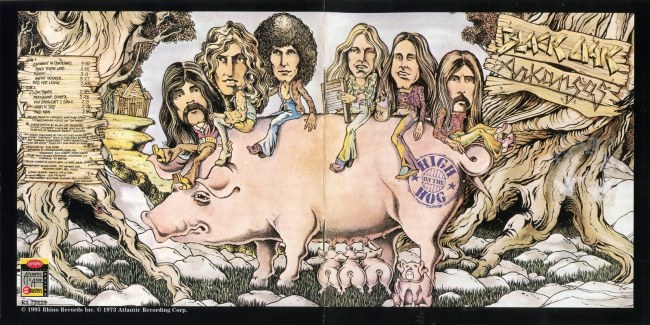 The quality of the interior gatefold picture isn’t great but you get to see BOA in the backwoods. Boy howdy.

I won’t subject you to the album itself but here’s BOA to the rescue live:

2 thoughts on “Album Cover Art Wednesday: High On The Hog”