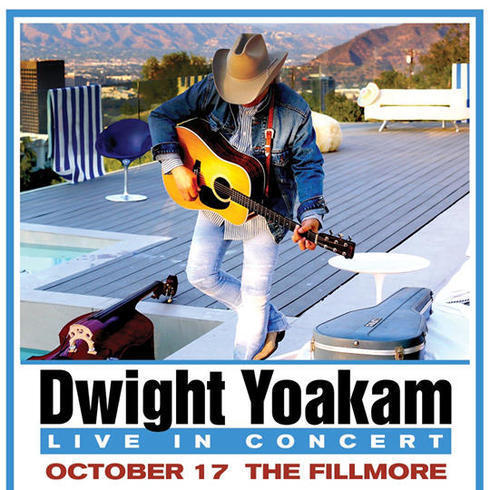 People who don’t read First Draft are always surprised that I like country music. I am emphatically a city boy, one might even call me urban or urbane. The second U-word is a value judgment so I’ll pass on that.

I don’t like all forms of country music but I like the real deal for the songwriting and singing. That’s why I like Dwight Yoakam who I saw live for the first time last night.

I’m notoriously stingy when it comes to concert ticket prices so I hadn’t planned to attend. I’d entered a contest but did not win freebies. On the day of the show, I received an email from the Fillmore informing me that two free tickets awaited at will-call. I was so skeptical that I called the box office for confirmation. Apparently, they were papering the hall because it wasn’t sold-out but it was my lucky day.

As someone who grew up in the Bay Area attending Bill Graham Presents shows, the name Fillmore is tinged with magic. I was too young to go to the Fillmore West but more or less grew up at Winterland, its successor concert hall.

I loved the venue. It would be a great place for a certain carnival krewe to hold its ball: hint, hint, hint. The Fillmore is spacious, well-ventilated, and attractive despite being attached to Harrah’s Casino. We did not gamble before or after. I didn’t want to press my luck.

I had high expectations but they were exceeded. Dwight Yoakam’s set was great. Dwight and his crack band played for two hours at a breakneck pace barely stopping for a second. It’s probably why Dwight’s sidemen are all younger than the star. They’re great musicians and rocked like crazy. It goes without saying that Dwight is one of the greatest singers to have ever walked the planet, with or without cowboy boots.

It was a night for doppelgangers. Dr. A spotted a guy who resembled Gret Stet goober candidate Eddie Rispone. Mercifully, it was not him. A guy who was a dead ringer for our pal the Bear Jieux danced with Dr. A as the band played Tonight The Bottle Let Me Down. Initially, she thought it was him but it was not: the doppelganger was equally hairy but too short.

You’re probably wondering about the post title, Dwight & Me. We had tickets to see him in Biloxi in September of 2005. The show was hurricaned out and we were in exile in Dallas in any event. It was a long time coming but I finally saw Dwight Yoakam. It was well-worth the wait.

I wrote about last night because I needed a respite from all crazy in the news. A post called Talking Turkey can wait until Monday. That crisis will still be there.

The last word goes to (who else?) Dwight Yoakam with his set closer and encore: