It’s been a long week in New Orleans. The collapsed Hard Rock Hotel sits there like a dagger pointed at our municipal throat. That’s led to concerns about damage to the beautifully restored Saenger Theatre across the street and other historic buildings.

There’s also been some serious conclusion jumping and finger pointing. It reminds me that *all* Americans love to jail people, liberals and conservatives just want to jail different people. TFC. What’s that spell? This Fucking City.  I’ve created a Fish Cheer for 21st Century New Orleans.

In addition to my acronymic exploits, I have a new catchphrase via the Insult Comedian: “They have a lot of sand over there; a lot of sand.” Believe me.

Cole Porter wrote this week’s theme song in 1935 whilst taking a Pacific cruise. It debuted in the Broadway musical, Jubilee.

We have two versions of Begin The Beguine for your listening pleasure: Artie Shaw and his orchestra, and Sheryl Crow from the 2004 Porter bio-pic, De-Lovely.

A quick note about bio-pics. Cary Grant played Cole Porter as a manly heterosexual in the 1946 movie, Night and Day. In 2004, Kevin Kline played Porter as what he was: a gay man in  a “lavender cover-up” marriage with a woman. There was no sex in the first movie, way too much in the second. Neither movie did a good job depicting Porter as a genius songwriter. That’s why we remember Cole, not who he slept with.

Let’s jump to the break whistling, You’re The Top. That’s bound to guarantee a smooth landing unless we land on the Tower of Pisa. In that case, we’ll just have to lean into it…

Let’s kick off our second act with an REM tune that almost qualifies as disambiguation. Let’s begin again, begin the begin:

Nazi Mocking: Satire can be a tricky thing, especially satirizing Hitler and the Nazis. There’s a new movie, Jojo Rabbit, that mocks the Hitler Youth and features Der Fuhrer as a blonde kids’ imaginary friend. The jury is out as to if it will work. I’ll review it in this space if I see it on the big screen.

One good sign is that Sam Rockwell is in the movie. He has good taste in material.

Slate’s Rebecca Onion takes a detailed look at past efforts including The Great Dictator, To Be Or Not To Be, and The Producers. There’s also this Three Stooges short:

The last word of the segment goes to  Sig Ruman in To Be Or Not To Be:

Now that I’ve lowered the tone considerably, let’s get serious.

Documentary Of The Week: I was thrilled when I heard that Showtime was airing a five-part documentary based on Ethan Brown’s fabulous 2016 book, Murder In The Bayou. I’m even more thrilled that it turned out so well.

I wrote about the Gret Stet reaction to Ethan’s book here, here, and here. Holy crap, I sound like an MP agreeing with his party leader.

Murder In The Bayou takes a look at the unsolved murders of the Jeff Davis 8. I like the approach the filmmakers took: there are none of the dramatizations that undermine other true crime documentaries. They focus on interviews with friends and family of the victims, knowledgeable local observers, and suspects such as the disturbingly likable criminal Frankie Landry.

I particularly enjoyed when Ethan became an active participant in the documentary. The best true crime shows always have the author/investigator as a protagonist. It’s effective in this case because I know and like Ethan.

It was also good to see the NYT’s Campbell Robertson who I also know and like. I hope he’s forgiven me for sending him to that nasty porta-potty when he covered the Trump inauguration protest in New Orleans. Sorry about that, Cam.

I give Murder In The Bayou 3 1/2 stars and an Adrastos Grade of B+. I liked it so much that it inspired me to re-read the book.

The last word of the second act goes to Linda Ronstadt:

We begin our third act with our favorite stolen feature. 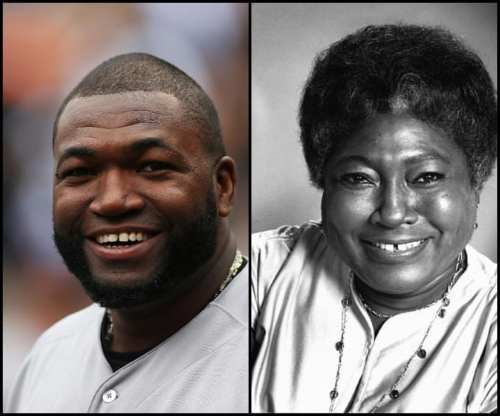 Apologies to any Yankees fans out there. Did I just say that? WTF is wrong with me?

The Yankees are near the top of my sports hate list. I’ll cleanse my soul with a song that has nothing whatsoever to do with the teeve series:

I care. It’s movie time but I need some popcorn first.

The Classic Movie List: I had an interesting twitter chat with an old online friend, KT. She lives in San Francisco but is an A’s not a Giants fan. I’m sure she has her reasons.

Anyway, her favorite movie is Local Hero, which inspired me to do a Burt Lancaster list. This was a toughie: Burt was in so many great films. He made some fine Westerns but none of them made the cut, not even Gunfight at the O.K. Corral. What can ya do?

The last word of the segment goes to Burt with one of many barbs aimed at Tony Curtis in Sweet Smell Of Success. 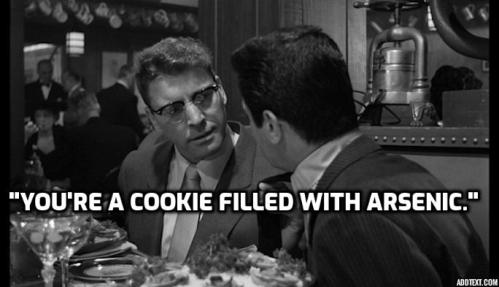 Saturday GIF Horse: It’s time for more satire. I’ve already used the Adenoid Hynkel “dances with the globe” thing in this space. Here’s another one from The Great Dictator wherein Hynkel and his Italian counterpart Napaloni (Jack Oakie) play with spaghetti.

Well, you know what they say: The pasta is prelude.

Weekly Vintage Video: I’ve featured an Aimee Mann video in this space before, Here she is with her original band, ‘Til Tuesday, for your Saturday enjoyment.

I might as well throw in one by her hubby as well:

I was nervous that Michael’s brother Sean might punch my lights out if I slighted his big brother. Not that anyone would confuse me with a paparazzo. I didn’t even play one in Two Weeks In Another Town. Oops, that starred Kirk Douglas, not Burt Lancaster. Hey, they made seven movies together and I am easily self-confused.

Let’s close up this honky tonk with some music.

Saturday Classic: I’ve been accused of being obsessed with the Byrds and Roger McGuinn. I plead guilty as charged. Here’s Roger’s eponymous first solo album:

That it’s for this week. The last word goes to Burt Lancaster and some other famous faces in a great scene from a great film, From Here To Eternity. 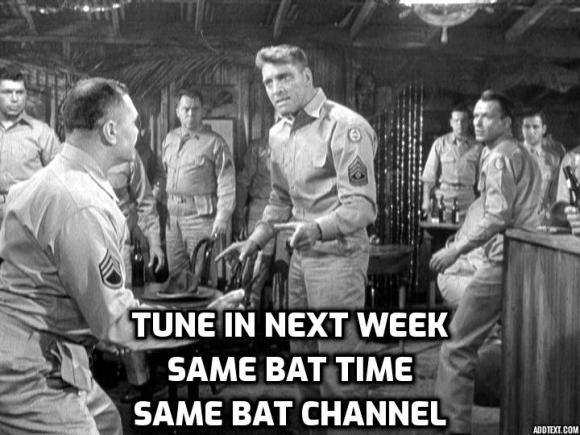