Step right up and place your bets!

Who will be the first intrepid reporter to ask Little Scottie if Dick Cheney had been drinking when he blasted Harry Whittington in the face with his shotgun?

Here are some of the players with odds calculated by your favorite obsessive gaggle observer.

Breakdown: Helen has yet to ask any questions about Cheney’s hunting incident, but she can usually be counted on to stick it to Scottie and generate a reaction.

Breakdown: Gregory is the favorite, he’s been unrelenting on this issue (maybe he hates to be scooped by a local reporter from a paper with a hyphenated masthead).

Breakdown: Although she has asked a couple of pointed questions recently, Malveaux’s track record indicates that her deference to All Things Bush will prevent her from asking such an impertinent question.

Breakdown: Plante has been in the business long enough to notice when someone farts in an elevator, he just might be willing to buck his corporate editors this time.

Breakdown: An independnet-minded reporter who has pressed Scottie in the past, it’s unclear whether Ryan is savvy enough to figure out the alcohol angle.

Breakdown: FOX News? FOX News?!?! Are you kidding me? 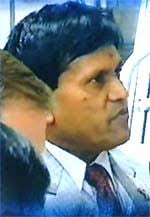 Breakdown: Goyal has never asked a question that did not invovle India or Pakistan. Never. Not once.

Breakdown: Les is the darkhorse candidate. Typically subservient to the various causes of the Right, particularly the homophobic faction, Les has been known to press Scottie on an uncomfortable topic, such as the President’s views on contraception. Les just might surprise us here.