Morning, everyone! Let’s check in on the deputy Kraken, shall we?

Wood made the assertion during an event in Myrtle Beach, where he was campaigning to become the next South Carolina Republican Party chair. Video was later obtained by PatriotTakes.

“He won the election,” Wood said of Trump. “Donald J. Trump is still the guy the military will call for the code if they need a first strike. Joe Biden is not the president of the United States.”

Apparently, a site called Patriot Takes got a video, the info was picked up by RawStory and then by DroolinDog. I know RawStory is hard left; I never heard of the other two sites.But, regardless of the source, there’s a video. It sure seems that Wood is making this wild assertion about the military chain of command. I can’t imagine that the military would actually bypass Biden and phone up Trump for orders. I also can’t imagine how, even if that were true, Lin Wood would know it.

Go ahead, dump on RawStory all you want, but I think Lin Wood has just totally lost it.

DJT signed the Insurrection Act on Jan 10 of this year. We all know the election was stolen, and Biden is, if anything, an illegitimate POTUS. Taking the oath of office is Treason. With the Insurrection Act, Civilian government is temporarily on hold. The military is in control. A covert operation is now engaged to restore the Constitutional Republic, from the current insurgency.

For details on the tasks that have been performed, are being performed, and will be performed to complete the transition and return to civilian control, see sections 11.3 and 11.4 of The DOD Law of War Manual:

To: C210N
Uh, no. That is nonsense and disinformation. Trump isn’t secretly running the military. No cavalry will riding into restore anything anytime soon. Trump is a private citizen residing in Florida with as much control over the U.S. military as a guy bagging groceries at a Wal-Mart in Cedar Rapids…

When SDNY gets through with him, he’s going to WISH he was a guy bagging groceries at a Walmart.

which is to say, none.

Woody pecker does still have some fanboys in Freeperville :

This appears as a facet of Eisenhower standing orders kept out of view in the background.

Since that era there are whispers of a generation to generation contingent ready to activate to save the Republic no matter what circumstances emerge.

The Mission is to ensure the United States will never be conquered.

Insiders report all that has been revealed had to happen for ordinary Americans to understand the consequences of an attack from within. It is asserted there is simply no other way for people to become aware other than to directly witness history unfold before their eyes.

Those accusing Lin Wood of being ‘crazy’ conveniently ignore the ‘crazy’ history of 2020. If ‘crazy’ connotes “insane”. “sociopathic”, ‘bizarre’, ‘out of mind’ and so on, then Lin Wood is a model of mental fitness compared to the events of 2020 and the behaviors of so-called ‘elites’.

.
Most of the Freepers, however, are of a different opinion :

Guy is a kook or a saboteur or both.

Lin Wood is a nut job!

lin wood didn’t lose it. he never had it. if you followed him breathlessly during the election aftermath debacle, you’re a fool. if you still follow him breathlessly, you’re clinical.

I paid attention to Lin Wood until he started telling people in GA not to vote GOP . . .

many people here on FR vociferously advocated the boycott, and defend their mindlessness to this day. the boycotters gave the senate to the democrats.

To: Eagle Forgotten
Lin Wood has lost his frikkin mind.

He had one to lose?

He lost Georgia for us, and now he’s trying to screw up South Carolina. If there was a stealth Manchurian Candidate in our ranks, it this guy.

The MSM pounces on the idiocy, and it sets us back.

you need counseling. lots of it. stat.

The path of a Digital Soldier, according to Gen Mike Flynn:

“BidAn” ?
Whatever could that mean?
President Biden is actually a woman named “Ann”?
.
No – that would be crazy.

This stupid bugfuck batshit sack of crazy is a PILOT??

That does it. I’m never flying again.

I have to chime in about A/C call signs. BidAn has indeed NEVER flown on an aircraft with FAA call sign “AF1”. Fact.

But, and I do not have a proper explanation for it, so I’m merely putting out the facts as I see them: Caballa Harris *HAS* flown on aircraft with an FAA call sign of “AF2”. One possible explanation that makes sense to me: the rules for AF1 designation are strict and exacting; the rules for AF2 are guidelines. Perhaps there are other explanations, YMMV.
If or when Caballa invokes the 25thA, with my preferred explanation, Caballa gets leapfrogged by the 3rd in the sequence due to ineligibility – the AF2 use is loose, the 25A is strict and enforced.

Another note on AF2 – there was a few hours about a month or so ago when there were TWO AF2’s in the air simultaneously! There is a YT monkeywerx vid that pointed it out and discussed the anomaly. Happened on a day when Caballa traveled from DC to ATL. The second AF2 was westbound… no idea where it went. These ARE strange times indeed!

Thank you for posting this.

I have noticed people spelling Biden’s name as you did (”bidAn”) and am wondering why. Is it a private joke or something that should be “duh”-obvious? Thank you!

Biden’s name as you did (”bidAn”) and am wondering why.It’s not private, but seems to be not ubiquitously used… yet. It’s very prevalent in many Telegram channels discussing the situation.

Biden is the man who was in the Sinate for 50 years. He was a VP. He is long gone (sometime during the Trump presidency).

Along comes DJT as POTUS, who basically ran a 4-year Sting Operation (perfectly legal, under many emergency-related statutes and EOs), carried out by the military (Trump’s military, not 0bama’s) and reformed – again, by the administration – FISA courts. Biden out, and a “white hat” actor put in place. The scuttlebut, is that this actor is aided by CGI, is good at what he does, just like a bad guy in an bang-em-up action movie, wears a tight-fitting whole face mask. He makes “mistakes”, few at the beginning, but more and more now, as the reveal comes close. One of his roles is to take all the negative flak over the US and the world going to pot. This actor is BidAn. Or, just Bidan. I prefer “BidAn” for emphasis.

Since this is a military operation, covert now, we as laypersons can only speculate on the clues released. We don’t get to see him putting on or taking off the mask. It is a timed reveal to accomplish many other requirements – we have a Great military! One of the Q drops states – ‘Good movies require Great actors’.

In this pic, note the ear lobes…. these are two different people, Biden on the left, BidAn on the right. 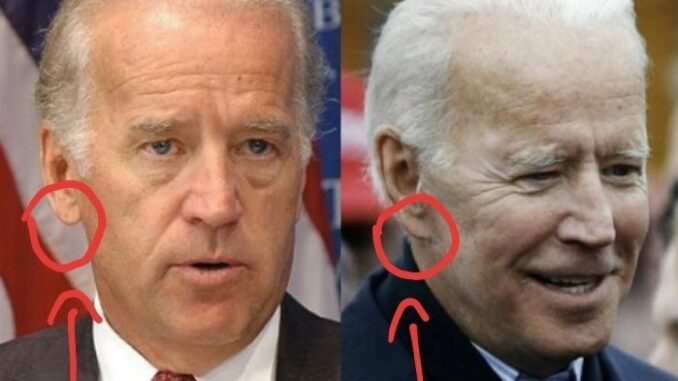 To: Kalamata
The ‘a’ versus ‘e’ is just a convenient way to distinguish between real Biden and actor “biden”, that apparently has become standard operating procedure in discussions and channels that I follow.

Do you not have any family or close friends who share my concern about your deteriorating mental health? Seriously. I am concerned for you.136 posted on 5/13/2021, 11:35:03 AM by MD Expat in PA (No. I am not a doctor nor have I ever played one on TV. The MD in my screen name stands for Maryland)

Fuck that “family or friends” shit.  I’m more concerned that this Qtard is going to crash the Cessna C210n plane he’s piloting into a building, because he thinks he got an encrypted message from The Darnold telling him to do it.
.
And finally – the post of the thread!!

This has to be one of the saddest threads I’ve ever read in my 20 years on Free Republic.

Well, certainly the weirdest.
.
See you good citizens next Monday.
.