This is important because, in a lot of non-Native American minds, Natives are figures in history books. However, Native Americans/American Indians exist in the present. A Supreme Court decision handed down yesterday is a good reminder of that.

This particular decision comes in a two-week period that has been a firehose of awful news for American democracy, so I understand that this may have fallen by the wayside for many Americans. There’s just so much.

The McGirt decision declared that a large swath of eastern Oklahoma including Tulsa, was never been disestablished, and therefore since it is part of the Creek Reservation, still remains Indian Country. Therefore, in tribal jurisdiction.

The particular case argued is ugly, a non-Native man accused of heinous crimes asked that his conviction be vacated over the fact that McGirt means his case can’t be convicted by the federal government. An appeals court agreed, and the Oklahoma Republicans, who were angry about McGirt in the way that only racists can be at the thought of non-whites having any rights, ran it to the Supreme Court.

The decision in the case, Oklahoma v. Castro-Huerta, ruled that states have “concurrent jurisdiction” and therefore can prosecute state crimes on federal Native lands. The majority in the 5-4 decision just flat out said they did not trust Native courts to serve justice on Native defendants, which is plain racist.

It may come as a surprise to some people that the lone dissenter in the 5-4 decision was not Chief Justice John Roberts but Neil Gorsuch.

Gorsuch has long been a friend of tribal rights. Part of his dissent included this: 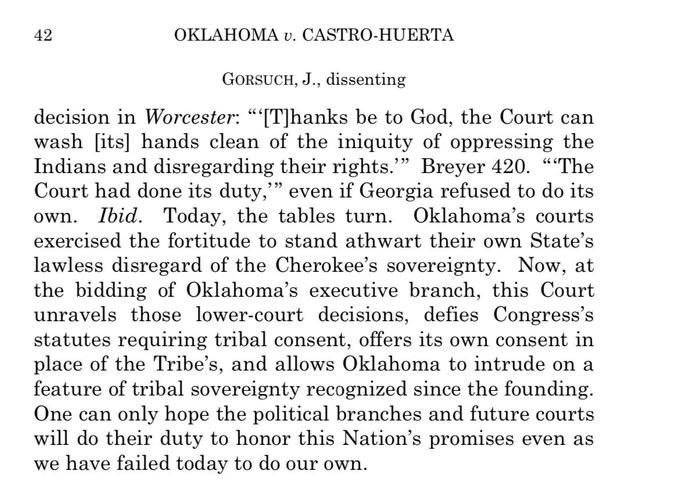 The governor of Oklahoma, who led the charge to get McGirt overturned, did what so many whites do in these things, claiming that they were doing this for the benefit of the Indian. In response, the Muscogee Nation replied:

“It hands jurisdictional responsibility in these cases to the State, which during its long, pre-McGirt history of illegal jurisdiction on our reservation, routinely failed to deliver justice for Native victims. While we hope for the best, we are not optimistic that the quality of effort from the State of Oklahoma will be any better than before.”

Loss of sovereignty is potentially disastrous for Native tribes. Without sovereignty, the indigenous population of the United States would be nothing more than a cultural group with no further status or protection, and the various states and the federal government would have no obligation to recognize the needs or wants of the tribal nations, nor protect them from say a developer who wants to mine for uranium on tribal land. It also gives tribes say on membership (important given how many weirdos are out there claiming great-grandma was an Indian princess so where are my tribal benefits).

This, sadly enough, does not surprise many Natives, given the history. America’s pasts are full of scams, lies, broken treaties, etc. in its dealings with the people who were the original occupants. As one Native woman I am friends with on Facebook said in light of the ruling:

“Dear America, when we say we don’t trust you, don’t get offended or pout, but instead, give us a REASON to trust you.”