There is a rather influential right-wing voice on social media known as catturd.

“Yes, yes but this is nothing more than some weirdo random person on Twitter, there are plenty of these so who cares,” you sniff dismissively. Well, note the number of followers.

“Yes, yes, but how can you call someone with such a ridiculous name ‘influential’ because surely they are not,” you sniff, again, dismissively. Well, the former president of these here United States has shared the deep thoughts of catturd repeatedly, and his musings are held up for consideration by Wildly Popular Moron Tucker Carlson on Rupert Murdoch’s Cash Cow, Fox News. This is not some rando on a fringe chat group venting his paranoia to a dozen other nutjobs. He has 1.3 million followers, many of which have proven to be violent, and he’s blasting stuff like this at them

Dismissing this stuff, ironically enough, is also why this is The Dumbest Timeline.

But that’s not the limit of the dumb that makes this The Dumbest Timeline. Noted Pathological Liar George Anthony Devolder Santos actually thinks that he can get away with lying about lying in the face of all evidence.

George/Anthony no doubt thinks this because, well, there is a decent chance that he might get away with it. You never really know in this current environment.

The right-wing brain is so broken that it can’t shift gears out of its state of dumb so it often looks profoundly stupid. For example, Pink Floyd got attacked for being “woke” for having a “rainbow flag” in their 50th anniversary of The Dark Side of the Moon logo. 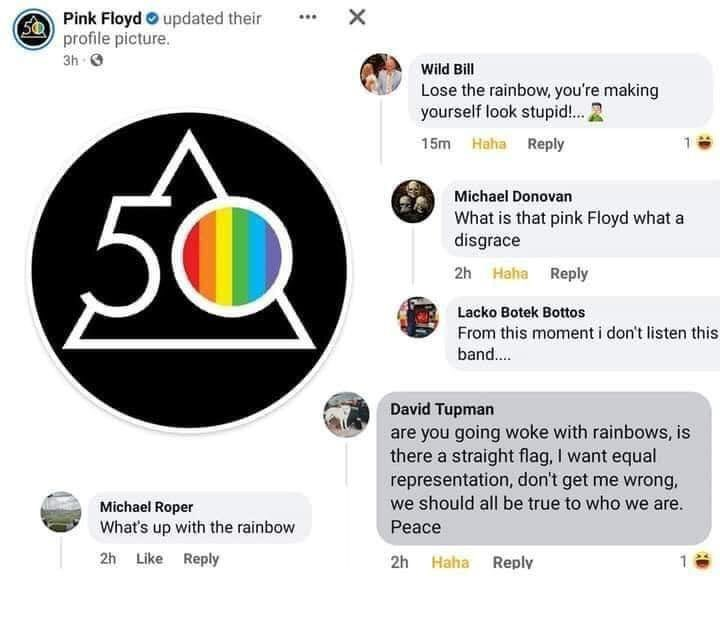 I guess they forgot what the album cover looked like, what with a prism and all. No word on whether past Malaka of the Week awardee agrees with this criticism of an album he helped make, but it would not shock me.

Has the right-winger in his life caught onto the latest Dumbest Timeline craze, that AOC and Nancy Pelosi and Joe Biden are coming for your gas stoves? Somehow, a discussion about new research finding gas stoves cause health issues, including worsening childhood asthma, has all the Freedom Fighters up in arms. This includes Dumbest Democrat Ever Joe Manchin.

This is a recipe for disaster. The federal government has no business telling American families how to cook their dinner. I can tell you the last thing that would ever leave my house is the gas stove that we cook on. https://t.co/8IEFM44UvE

Again, normally this kind of stuff was shit you’d hear from the stupidest guy at the diner counter or your dopiest uncle at Thanksgiving, but no, it is in the mainstream now. As you can see in the link, it had to be clarified that an all-out ban was not happening and they were looking for ways to reduce health risks, such as requiring outside ventilation for stoves in new home construction. So, it turned out, you were not going to be awakened at 3:00 a.m. by the Woke Police breaking into your home to confiscate your gas stove.

I have only scratched the surface here. I have not even touched on the dumbness of The Former Richest Man in the World nor the two dopes in the header image of this post. It really has got to the point where I can’t really tell if this is good for comedians because there is so much new material, or bad for comedians because they can’t beat the screwball comedy that is our current timeline.

Idiocracy, it seemed, was a profound work of prophesy.

The last word goes to the late David Crosby, who passed on yesterday. A rather gregarious guy on Twitter, I had several interactions with him there, including when he replied to me that a CSN&Y reunion likely would not happen because Neil does what he wants when he wants, both he and Stephen can be real bastards, and perhaps most hilarious, Graham is the most passive-aggressive person on the planet.

Everyone will share Croz’s CSN/CSN&Y/Byrds output, and rightfully so. But I want to cast some light on his late-career work, which is wonderful In the grand tradition of Johnny Cash and Warren Zevon, the last song on his great final album could very well be, literally, a last word.

3 thoughts on “The Dumbest Timeline”