Soooo much going on, right? Subpoenas, raids, good economic news, bills getting passed, Republicans being their usual lyin’ autocratic selves, and so on and so forth. It’s been a veritable avalanche of pretty good news for Democrats, and selecting one thing to write about is like choosing from the menu at your favorite restaurant. It’s a hard decision.

So, I will go the buffet route (which for the record, I don’t know if I can ever do an actual buffet again post-COVID) and cover a few topics.

We Should Panic More About Moral Panics: The news that Cretin Governor Ron DeSantis (N for Nazi – FL) is coming to my home state to stump for Walking Rural Fascist Stereotype Doug Mastriano on my wedding anniversary, August 19. For my wife and I, a nice present would be for DeSantis to slip on a banana peel as he walks up to the stage and that becomes a beloved meme, but I digress. I want to talk about how DeSantis has accomplished his awful progress on destroying public education in Florida.

Two moral panics drove it, teachers “grooming” kids and critical race theory. DeSantis passed the infamous “Don’t Say Gay” and “groomer” laws this year, vague bills that enable conservative parents to go after any teacher they please if they think they are “grooming” kids as pedophiles or attempting to convert them to homosexuality or whatever their broken brains believe happens in schools.

This of course has its roots in the Stranger Danger moral panic, which is complete bullshit because very, very few child abductions are by strangers and that is not an arguable point. You can also add a dash of the Satanic Panic idea that schools were holding satanic rituals, which ruined the lives of multiple innocent people.

What we are seeing in DeSantis is some of the disturbed ideas behind QAnon regarding liberal child trafficking bearing fruit in actual legislation, and the roots of these laws can be found in QAnon. Which, in turn, took hold because way too many believe that there are perverts in panel vans in every neighborhood. Congratulations, people who believe that! You did it.

As for CRT, it was never taught in K-12 outside of a very few instances because it is a high-level concept. DeSantis, of course, passed another rather vague bill banning “CRT.” What makes this dangerous is, once again, teachers are unsure what they can teach that won’t put them in jail.

CRT has its roots in Americans who refuse to be honest about racial history, from the Trail of Tears to slavery to who exactly put up all those Confederate statues. It is highly disingenuous in a particularly awful way, and I wish I could say that just whites who are conservative supported it (I’ve heard enough “liberals” defend the concerns and I really hope they learned from that mistake). Again, congratulations, for enabling another myth to take hold in state law. Both of these are really hurting our public education system, which of course is the end goal of all this.

Beto Goes Samuel L. Jackson On His Ass: Samuel L. Jackson will be remembered as a great actor, especially for his tough, profane, and no-bullshit hitman character in Pulp Fiction who was not afraid to shut someone down both physically, and verbally. Gen-X Rocker Dude/Texas Governor Candidate Beto O’Rourke channeled a bit of that Jackson verbal swagger last night was talking about the horrific school shooting in Uvalde, Texas at a campaign event.

When he was describing what happened during that awful day, someone laughed loudly, and Beto’s response was from the heart.

.@BetoORourke to a Greg Abbott supporter who laughed when the gubernatorial candidate mentioned the mass school shooting in Uvalde, Texas: “It may be funny to you motherfucker, but it’s not funny to me.” #txlege

I guess the usual suspects will be clutching their pearls and going on about civility and how both sides are just as bad, but this is the kind of thing that thrills the Democratic base and is easy to deflect criticism from. Such as:

“So, you are more upset about a curse word than a man laughing at the slaughter of children?”

This Week in Both Sides Are Just As Bad, The Trump Raid Edition: I guess it is to be expected, but some of the usual suspects in the media decided that the FBI raid on Trump had a both-sides angle. Here is an example: 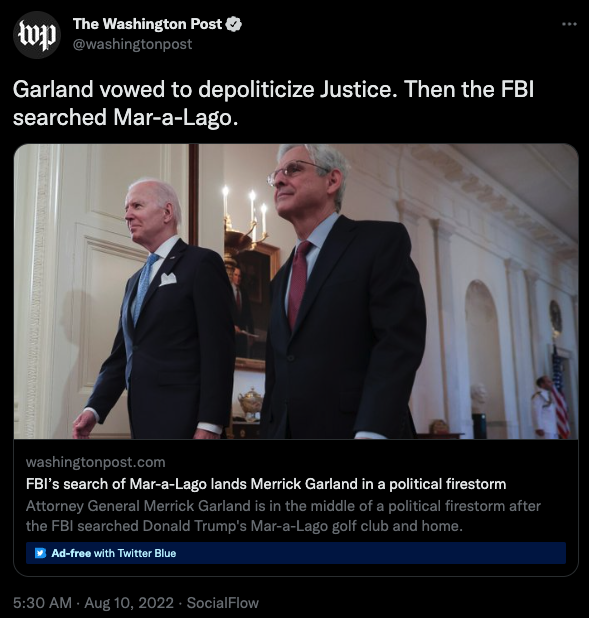 Merrick Garland, Politically Motivated Actor is a wild take. The man is measured and careful, obviously.

There also was/is lots of hand-wringing about violence in response to Trump being raided and potentially being indicted. And that IS a legitimate concern. However, that should not be a consideration of whether or not Trump should be indicted, just something for law enforcement to handle. We cannot have a democracy when the threat of violence prevents bad actors from receiving consequences.

The last word goes to Mr. Jackson, who reminds us what Fonzie is like and ponders who is the evil man, who is the righteous man, and who is the shepherd: