Last weeks “Obsession” segment on Christine“she may be stupid, but she sure is hawt” O’Donnell got me thinking about how right-wingers in general (and Freepers in particular) view women.

Let’s suit up and go watch the little big head boys do the objectification tango!

Salma Hayek talks about her humble beginnings, her former undocumented immigrant status and her charity projects in the new issue of V Magazine Spain, where the Mexican actress seductively poses for the cover titled “A Woman’s Weapons.”

Hayek’s involvement with women’s issues has distinguished her in Hollywood. Her advocacy includes promoting awareness programs about violence against women and on the rising discrimination against undocumented workers.

“I was an illegal immigrant in the United States,” Hayek said during the interview. “It was for a small period of time, but I still did it.” 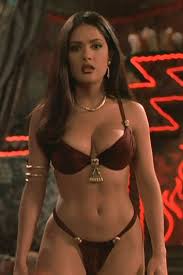 7 posted on Wednesday, December 08, 2010 9:33:18 AM byJohnBrowdie
.
Presumably, as the militias and ArizonaSchutzmannschaftline all the wetbacks up at the wall they’re always fantasizing about, they’ll be sorting the line into “Pacos” and “Chicas Bonitas”.
To: re_tail20

Not guilty. So say we one, so say we all.

Gives a whole new meaning to the ‘dream act.’

I got her women’s issues right here.

I’ll give her amnesty.

26 posted on Wednesday, December 08, 2010 9:51:41 AM bybabble-on
.
.
To: Vendome
Good God Almighty – praise His creation… We need the amusement park approach to immigration – build the wall, but add a gate. Put up the sign with her picture stating: “No entering America unless you are at least this smokin’ hot.”

Small print underneath stating the exception for those who can field the shorthop grounder and bat at least .230

34 posted on Wednesday, December 08, 2010 10:15:14 AM byHegewisch Dupa
Well, I was kinda joking about this before, but truth is definitely hornier than satire.
To: Vendome

You can bounce quarters off of that stomach…WOW

38 posted on Wednesday, December 08, 2010 10:19:10 AM byhoyt-clagwell (5:00 AM Gym Crew)
.
How proud their Moms must all be.
More sexual objectification after the smoking hawt jump…
Next –The Most Trusted Babe In News!
Courtney Friel is the hottest woman on Cable News. Oh, shut up. We just said what you were thinking.
IHateTheMedia.com ^ | 03/20/09

Soup: How did the gig with Fox News come about?

an endless supply of incredibly hot young women is the basic operating theory behind the Fox News Channel. And country music.

Poker tour? I wonder if there was liquor involved.

I have no idea what her voice sounds like. My mind’s usually elsewhere…

Minnesota Rep. Michele Bachmann dropped out of the race for House Republican Conference chair on Wednesday night, ensuring that the GOP’s leadership elections will go on without any serious competition.

In a statement sent to a handful of reporters Wednesday evening, the tea party favorite said that Texas Rep. Jeb Hensarling has her “enthusiastic support for his candidacy” for the top messaging post in the GOP.

I can’t imagine that anybody got to her.

Wonder why she dropped out?

4 posted on Wednesday, November 10, 2010 8:06:04 PM byWestbrook (Having children does not divide your love, it multiplies it.)
Because after the Whip Count, she realized that nobody would vote for her? Just a wild guess, mind you…
To: Non-Sequitur

The GOP leadership really owes the Tea Party something. Looks like their memory is pretty short.

.
“Life is short. And so are you.”
To: MotorCityBuck

Sometimes it is better to be outside the fray. That way one does not contaminate oneself when the establishment screws up.

To take over an organization, your people have to replace their people.

24 posted on Wednesday, November 10, 2010 8:18:17 PM byansel12
.
Yeah – likethat’ll happen.
The professional politicians of the GOP aren’t going to let the feces-throwing contingent anywhere near the reins of power.
Rand Paul was just a sop to the teabaggers – the GOP leadership knows that he’ll have as much luck “bringing down the Fed” as he would have pulling a freight train with his teeth.
To: Non-Sequitur

They’ll create a position for her.

thye didn’t even for the new guys to get sworn in before the started blowing us off.

You didn’t think that the Tea Parties would affect any real change did you?

Well, she’s leading a lot of FReepers around by their naughty bits…