Morning, all – it looks like the Freeperati are still in serious denial re: believing the messaging is faulty, rather then the product.

Allow me to demonstrate – we’ll reach way back for this first one –Rove, Rove, Rove, you’re toast!

New York’s Gabriel Sherman reports that Fox News is scaling back airtime for Republican pundit Karl Rove, in what appears to be a reprimand for Rove’s meltdown during the network’s live election broadcast.

Sources
told Sherman that Fox News chief Roger Ailes has ordered his staff to
bench Rove and his fellow GOP pundit Dick Morris, two of the network’s
most vocal partisan voices whose predictions turned out to be
spectacularly wrong. According to Sherman, producers must now get
permission before booking Rove or Morris on Fox shows.

The move comes as Fox takes steps to rehab its image in the wake of Republican defeats this November.Rove, in particular, has been widely mocked by members of both parties, both for his onscreen tantrum and for the abysmal performance of his American Crossroads super PAC.

Of course, I don’t need to remind you that all through the Dubya Decade these selfsame Freeperati were all:

And the studio set gained 1500 feet in altitude after the weight was released.

In Texas don’t they call a guy like that a piss ant?

he can go into hiding with Mittens

and please take W with you

.
OK – surely there must be some of the Dubya Fanboys left in Freeperville?

How was Rove supposed to know that the commie ‘RATS would take their voter fraud to such a massive level? It’s not Rove’s fault.

Sure there was -some- fraud, but not massive fraud as you suggest.

The stupid party just got its ass aboslutely kicked.

They should have pulled him after what he did to Christine
O’Donnell on the night that she won her primary, and how he did
everything he could to throw ice water on her momentum during that week.

He really went after the tea party that year and hurt us bad.

He only dreams he was that powerful.

MAYBE a bad candidate like O’Donnell’s bad loss is the fault of the
candidate. I realize that’s a completely insane, out there, crazy
theory.

To: presently no screen name

We lost because our politcal party ****ING SUCKS.

If it didn’t ****ING SUCK, then it would not stand for voter fraud occurring at all.

Whatever happened in 2012 happened as a direct result of the GOP ****ING SUCKING.

Pardon my French, I’m tired of being back stabbed by a party that ****ING SUCKS.

Much more OWM angst below the *****ING FOLD

Next up –angry white men unite!

After
three months of denial, anger, despair and depression over the results
of a bruising national election that gave Democrats an edge in Congress
and kept President Barack Obama in the White House, Republicans know
they must adapt if they are to move forward.

They acknowledge that it’s time for a serious gut check. (Or as Haley Barbour put it in November, a “proctology exam.”)

Whatever
bodily metaphor you choose, the fact remains that the election so
jolted and shocked the party that it is taking real steps to change.

And change they will! As soon as they figure out how.

While
Republicans in Virginia and other battleground states launched an
effort this week to alter electoral college rules so that votes are
doled out proportionately–which would likely give the GOP at least a
short term edge–GOP leaders here discussed their party’s own
shortcomings and sought areas of internal improvement.

Almost
every conversation in the bar of the Charlotte Westin Hotel this week
involved a discussion about what the party must do to win the next
elections. Floating through the air is a desire to re-capture glorious
days of the past, a challenge made difficult by a country that refuses
to stand still. Demographics are changing, minorities are growing in
political influence and views on social issues like gay marriage are
drifting rapidly leftward. Something’s got to give.

Are you Freeperati just gonna stand there and let them call you a bunch of Angry White Men?Are ya?

Well I AM an angry old white guy!

Having a black RNC Chairman didn’t make a damn bit of difference.

The blah people saw through our clever ruse! Curse them!

The only answer is to effectively answer them and start throwing it
right back at them. This is war, but the Republicans don’t seem to
realize that they are in one.

I am an angry White man & I won’t stand with anyone who doesn’t stand by me.

Guys – this isn’t helping address the problem.
It is, however, hilarious.

To: Sub-Driver
Republicans prepare for a comeback: ‘We can’t come off as a bunch of angry white men’

Instead, try to come off as a bunch of angry AMERICANS. What a bunch of wimps! Where’s the fire in your belly! Stop using libtard terms!

Where in the hell did you get the idea that the Republicans consist of only “white men”? Dammit!

That’s a tough one.

The GOP candidate’s race-based, monochromatic campaign made him a loser.

Let me research that one some more and get back to ya, OK?

To: Sub-Driver
IOW, “let’s triangulate and capitulate to the “democracy” mob for the win”.

Why is being white bad?

Up next –useful GOP idiots!

In
an interview with ABC’s Diane Sawyer and George Stephanopoulos during
ABC’s special inauguration day coverage this morning, former Secretary
of State Colin Powell lashed out at people in the Republican Party who
spent the last four years spreading “birther nonsense” and other “things
that demonize the president,” calling on GOP leaders to denounce such
talk — publicly.

“Republicans have to stop buying into things
that demonize the president. I mean, why aren’t Republican leaders
shouting out about all this birther nonsense and all these other things?
They should speak out. This is the kind of intolerance that I’ve been
talking about where these idiot presentations continue to be made and
you don’t see the senior leadership of the party say, ‘No, that’s
wrong.’ In fact, sometimes by not speaking out, they’re encouraging it.
And the base keeps buying the stuff.

“And it’s killing the base
of the party. I mean, 26 percent favorability rating for the party right
now. It ought to be telling them something. So, instead of attacking me
or whoever speaks like I do, look in the mirror and realize, ‘How are
we going to win the next election?”

Fortunately for the good General, his base of oh-so-not-angry-white-males can take this all in perspective.

So Colon Bowel sees no problem that all of Obastard’s records are sealed?

Suspect that he’s auditioning to be msnbc’s second al sharpton.

Colin Powell looked into himself and asked: “m I American or Black?”

He not only decided that question needed to be asked (it doesn’t) he
answered in the latter when he voted and now speacks 100% based on the
latter.

Shut up Colin, you damn racist.

I just have two words for Colin Powelland the Fat basturd from NJ:

Fu? That’s just one word,
Maybe if you put “KUNG” in front of it?
Time for one more – how about –Ghetto Rats?

NEWINGTON — A PTO mom who said she rediscovered God, conquered a crack
cocaine addiction and pursued her dream of working with children was
arrested Monday after she allegedly brandished a handgun at Chuck E.
Cheese’s.
According to police, Tawana Bourne argued with another woman at the
children’s restaurant on the Berlin Turnpike. Both women had children
with them.
“During this argument, Bourne allegedly brandished a .380 semiautomatic
handgun and chambered a round,” police stated in a press release. She
had a valid permit for the gun, they said.
Staff members called police and Bourne was charged with three counts of
risk of injury to a minor and one count each of second-degree
threatening and first-degree reckless endangerment. She posted $50,000
bail and is scheduled to appear in Superior Court in New Britain on Feb.
19.
“I’m a very good person,” Bourne said Tuesday. “Very, very involved in the community.”

WTF is it with Chuck E Cheese and ghetto rats?

You can’t go a week without a riot, robber, assault and now this.

There’s a video out there of a ghetto mama getting her three
year-old hood rat to go around CEC and pull wallets out of patrons
purses when they weren’t looking.

One visit to my local mall is convincing me that it’s time to move. 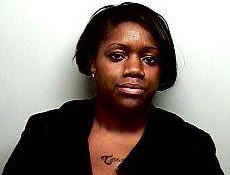 Never trust a woman named Tawana – especially if she is with anyone whose name starts with Rev.

Ah, Freepers – you never disappoint me.
Everybody stay safe and I’ll see you in a week.